Tommaso di Giovanni di Simone, known as Masaccio, was not only the greatest Florentine painter of the early fifteenth century, but remains one of the most important figures in the history of Western art. In only a few brief years, he created the early Renaissance style of painting.

Masaccio was born in the Val de’Arno in 1401, and the sixteenth-century biographer Vasari tells us that he received his affectionately applied nickname, which means “Slovenly Tom” in Italian, because he was indifferent to this personal appearance, careless with his possessions, and uninterested in worldly gains.

He was a pupil of Masolino di Panicale with whom he worked on the celebrated “Brancacci Chapel” frescoes in the Church of Santa Maria del Carmine in Florence. He was registered in the two Florentine painters’ guilds in 1422 and 1424, went to Pisa in 1426, and seems to have gone to Rome twice.

On his second trip to the Holy City in 1428 he died mysteriously, possibly from poisoning, at the age of about twenty-seven. The sculptor Donatello and the architect Brunelleschi, friends of the painter, had already established the Early Renaissance style in their respective fields when Masaccio began to paint, and helped to influence his thinking.

Masaccio added striking new elements to Giotto’s concepts of space and form, used scientific perspective with a fixed vanishing point and a fixed point of view for the spectator, controlled light coming from one source to cast shadows and create atmosphere, emphasized movement of the human body, and eliminated useless detail.

Masaccio’s view of the world was almost classically impersonal but possessed a deep underlying feeling. It therefore seems probable that he had studied the sculpture of classical antiquity. Masaccio’s influence extended in his time to Paolo Uccello, Andrea del Castagno, Filippo Lippi, and Benozzo. High Renaissance masters such as Leonardo da Vinci, Michelangelo Buonarroti, and Raphael paid him tribute, and his influence continues into the present.

Amazon.com
Saint Peter Following Saint John As He Heals The Sick with His Shadow by...
$129.99
BUY NOW 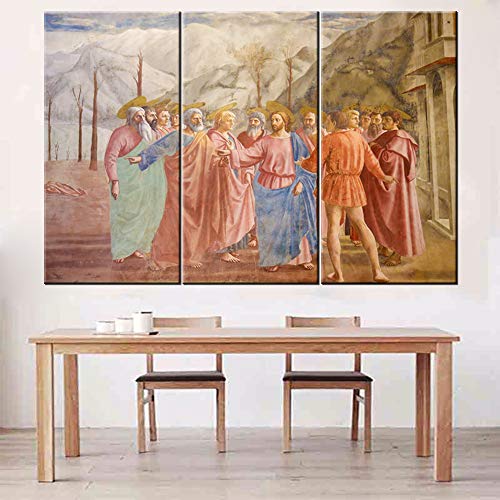