Sicily (Italian and Sicilian: Sicilia) is an autonomous region of Italy in Europe. Of all the regions of Italy, Sicily covers the largest surface area with 25,708 km², and currently has five million inhabitants. It is also the largest island in the Mediterranean Sea, though several much smaller islands surrounding it are also considered part of Sicily.

Sicily is directly adjacent to the Italian region of Calabria, via the Strait of Messina to the east. The early Roman name for Sicily was Trinacria, alluding to its triangular shape. Sicily has been noted for two millennia as a grain-producing territory. Citrons, oranges, lemons, olives, olive oil, almonds, and wine are among its other agricultural products. The mines of the Enna and Caltanissetta district became a leading sulfur-producing area in the 19th century but have declined since the 1950s.

The Sicilians aren’t the only people to consider themselves, and their island, a separate entity. Coming from the Italian mainland, it’s easy to spot that Sicily (Sicilia) has a different feel, that socially and culturally you are all but out of Europe. 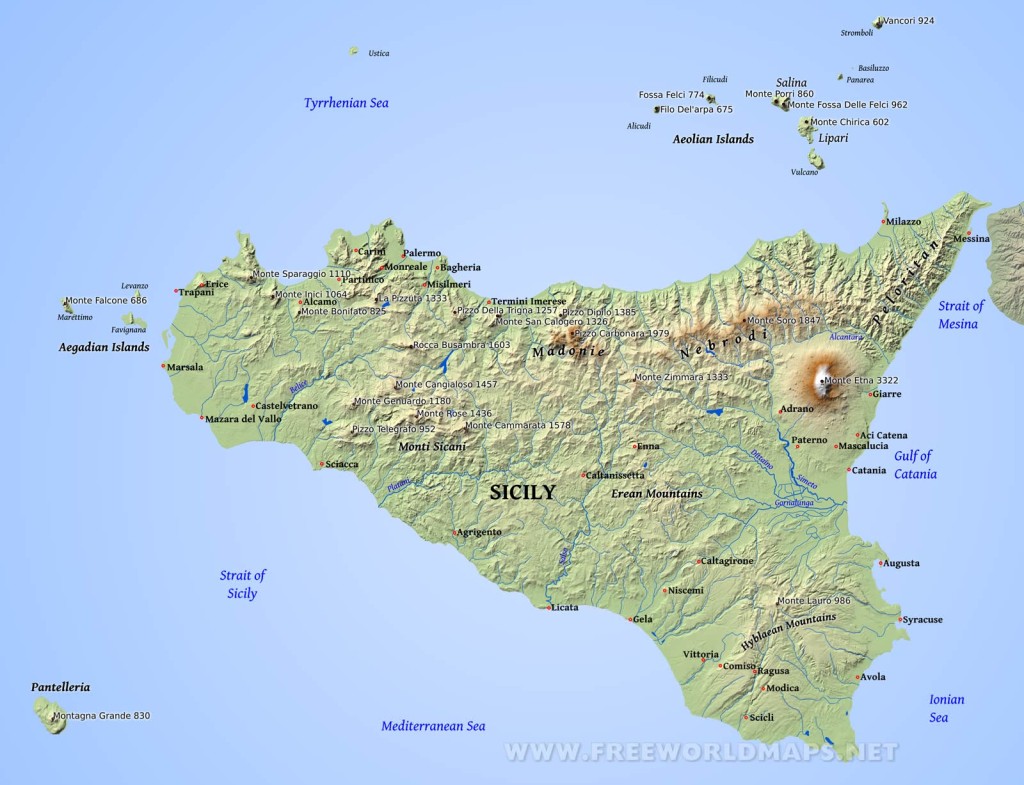 Occupying a strategically vital position, and as the largest island in the Mediterranean, Sicily’s history and outlook are not those of its modern parent but of its erstwhile foreign rulers – from the Greeks who first settled the east coast in the eighth century BC, through a dazzling array of Romans, Arabs, Normans, French and Spanish, to the Bourbons seen off by Garibaldi in 1860. Substantial relics of these ages remain: temples, theatres and churches are scattered about the whole island.

But there are other, more immediate hints of Sicily’s unique past. A hybrid Sicilian language, for a start, is still widely spoken in the countryside; the food is noticeably different, spicier and with more emphasis on fish and vegetables; even the flora echoes the change of temperament – oranges, lemons, olives and palms are ubiquitous.

Sicily also still promotes a real sense of arrival. The standard approach for those heading south from the mainland is to cross the Straits of Messina, from Villa San Giovanni or Reggio di Calabria: this way, the train-ferry pilots a course between Scylla and Charybdis, the twin hazards of rock and whirlpool that were a legendary threat to sailors. Coming in by plane, too, there are spectacular approaches to either of the coastal airports at Palermo and Catania.

Once on land, deciding where to go is largely a matter of time. Inevitably, most points of interest are on the coast: the interior of the island is often mountainous, always sparsely populated and relatively inaccessible. The capital Palermo is a memorable first stop, a bustling, noisy city with an unrivalled display of Norman art and architecture and Baroque churches, combined with a warren of medieval streets and markets. From modern and earthquake-ravaged Messina, the most obvious trips are to the chic resort of Taormina and the lava-built second city of Catania.

A skirt around the foothills, and even up to the craters of Mount Etna, shouldn’t be missed on any visit to the island; while to the south sit Siracusa, once the most important city of the Greek world, and a Baroque group of towns centring on Ragusa.

The south coast’s greatest draw is the Greek temples at Agrigento, while inland, Enna is typical of the mountain towns that provided defence for a succession of the island’s rulers.

Close by is Piazza Armerina and its Roman mosaics, and to the west, most of Sicily’s fishing industry – and much of the continuing Mafia activity – focuses on the area around Trapani. To see all these places, you’ll need at least a couple of weeks – more like a month if you want to travel extensively inland, a slower and more traditional experience altogether.

Amazon.com
Sicily: An Island at the Crossroads of History
$32.00
BUY NOW