Tuscany is like a picture that has long held an irresistible attraction for northern Europeans and Americans. The expat’s perspective may be distorted, but Tuscany is indeed the essence of Italy in many ways. The national language evolved from Tuscan dialect, a supremacy ensured by Dante, who wrote the Divine Comedy in the vernacular of his birthplace, Florence, and Tuscan writers such as Petrarch and Boccaccio.

But what makes this area pivotal to the culture of Italy and all of Europe is the Renaissance, which fostered painting, sculpture and architecture that comprise an intrinsic part of a Tuscan tour. The very name by which we refer to this extraordinarily creative era was coined by a Tuscan, Giorgio Vasari, who wrote in the sixteenth century of the “rebirth” of the arts.

Florence was the most active centre of the Renaissance, flourishing principally through the all-powerful patronage of the Medici dynasty. Every eminent artistic figure from Giotto onwards – Masaccio, Brunelleschi, Alberti, Donatello, Botticelli, Leonardo da Vinci, Michelangelo – is represented here, in an unrivalled gathering of churches, galleries and museums. 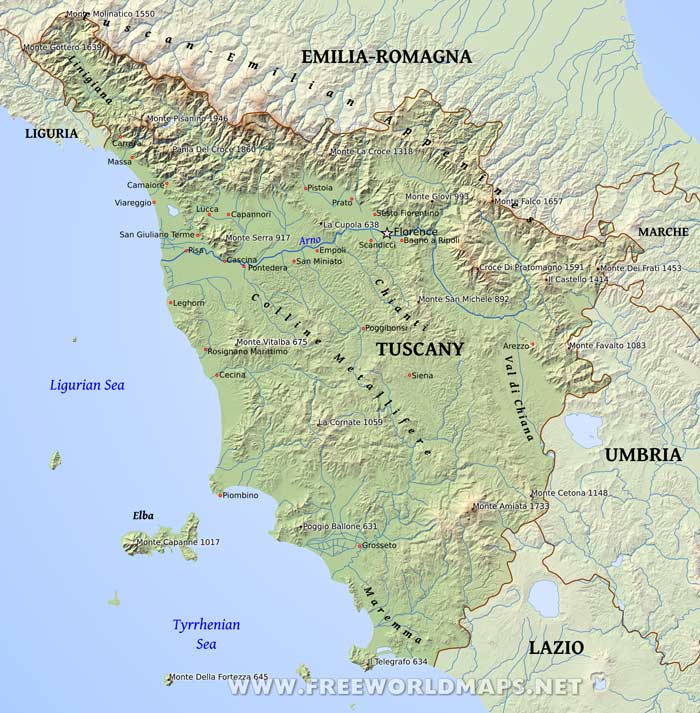 Other major cities, Pisa and Lucca, provide convenient entry points to the region, either by air (via Pisa’s airport) or along the coastal rail route from Genoa. Arezzo serves as the classic introduction to Tuscany if you’re approaching from the south (Rome) or east (Perugia). All three have their splendours – Pisa its Leaning Tower, Lucca a string of Romanesque churches, Arezzo an outstanding fresco cycle by Piero della Francesca.

Tucked away to the west and south of Siena are dozens of small hill-towns that, for many, epitomize the region. San Gimignano is the best-known, and is worth visiting as much for its spectacular array of frescoes as for its much-photographed bristle of medieval tower-houses, though it’s now a little too popular for its own good.

Montepulciano, Pienza and Cortona are each superbly located and dripping with atmosphere, but the best candidates for a Tuscan hill-town escape are little-mentioned places such as Volterra, Massa Maríttima or Pitigliano, in each of which tourism has yet to undermine local character.

If the Tuscan countryside has a fault, it’s the popularity that its seductiveness has brought, and you may find lesser-known sights proving most memorable – remote monasteries like Monte Oliveto Maggiore, the sulphur spa of Bagno Vignoni, or the striking open-air art gallery of the Tarot Garden. The one area where Tuscany fails to impress is its over-developed coast, with uninspired beach-umbrella compounds filling every last scrap of sand.

The Tuscan islands have rather more going for them – Elba may be a victim of its own allure, but the smaller islands such as Giglio and Capraia retain a tranquil isolation.