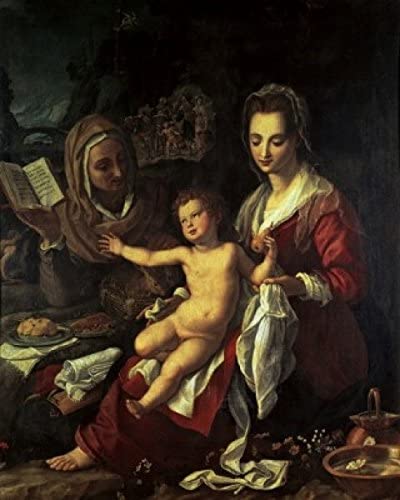 Agnolo di Cosimo di Mariano, called Il Bronzino, was born in 1503 in Monticello, outside Florence. He was first a student of, and then assistant to, Jacopo Pontormo, one of the founders of Florentine Mannerism. Pontormo, after studies with Andrea del Sarto, was influenced by Michelangelo, Leonardo, and Durer, and passed on these influences to Il Bronzino, one of the few artists able to get along with the melancholy, difficult old man. In 1523, when an outbreak of plague struck Florence, Pontormo took Bronzino with him to Certosa where they worked together on a series of frescoes, now badly damaged. During this period, Il Bronzino’s own reputation was established and by 1530 he was working for the Duke of Urbino. In 1532 he returned to Florence where he painted portraits and completed a fresco of his own before again working briefly with Pontormo at Careggi and Castello. In 1540 Duke Cosmic I, de’Medici appointed Il Bronzino his court painter and in 1545 the artist began the task (not completed until 1565) of decorating the private chapel of the Duke’s wife, Eleanor of Toledo. 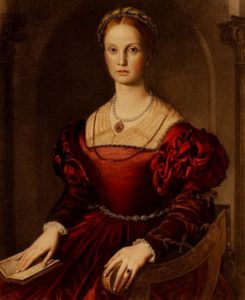 Il Bronzino is most famous for his portraits, delicately formal in style, coldly clear, and with an enamel-like surface. He also painted decorative, allegorical scenes and a great many altarpieces for various Florentine churches. All of these were equally formalistic and elegant, as strict and austere as the atmosphere created by Eleanor, who imported to the Medici court a Spanish love of ritual ceremoniousness. More classical in feeling and character than his master Pontormo, Il Bronzino brought to Mannerism an almost marble-like purity of form that was not be to be equaled until the nineteenth century by Ingres. Active as an artist all his life, Il Bronzino aided Vasari and other artists in the realization of the founding of the Florence Academy of Fine Arts in 1563. He died in 1572, in San Lorenzo, where, since 1569, he had been working on a large fresco, which was completed by his pupil Alessandro Allori.